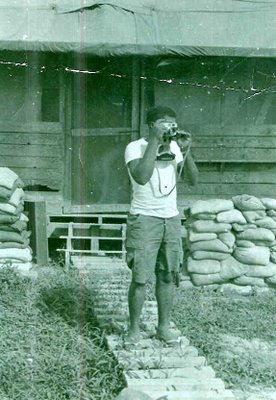 In the top drawer of my parents' dresser, my dad keeps souvenirs of his time in VietNam. When we were kids, we loved the money from Taiwan and the yellowed letters. We weren't so interested in the little medal in the black box. He'd tell us, time and again, to stay out of his stuff. But Daddy was a big pushover and we couldn't resist the allure of that treasure.
When I got older, I realized the medal was a Purple Heart. He'd been a Radio Telephone Operator and had gotten shot in his neck and shoulder. We used to trace the scars--not finely or precisely done, they resemble railroad tracks. They are firm lines that rise up from his skin, the result of an infection and keloids.
I moved the Purple Heart from the drawer and into my mom's china cabinet, a display that matches nothing else in there. "Why'd you do that?" he asked. "Because I don't think you should keep it buried," was my snappy answer. "Mm-hmm. Except you don't tell me what to do. I'm your father; you're not my mother," he said. But he left it alone.
My dad doesn't talk about VietNam. He used to, he says, when he was young. But then people would ask him things like, "Did you kill anybody? What is that like?" And he'd get so angry, so offended, that he thought it was better just to make the subject taboo.
So there are only three occasions on which I've been able to get a little bit of his story. I interviewed him once for a Vietnam and Watergate class I took while working on my Master's. Basically, I just let him talk. My professor, himself a VietNam vet, found the transcript riveting. My dad has a way with words that can keep you enthralled. I remember that my professor smiled and repeated my dad's words about arriving "in country." "I haven't heard that in a while," he said.
The second time was for a colleague here whose dissertation was about the war. He wanted to know more of my dad's story. Again, my dad opened up a little. "An RTO?" my colleague said, "He had a dangerous job." All I could say was, "Really?" "You have to keep his story, elle. Whenever, however he wants to tell it."
Finally, I went to DC a couple of years ago. My dad has never been to the VietNam memorial. I asked him if there were names he'd like me to shade. He thought for a while and then gave me three. One of them included an old guy that they'd looked up to. By old, my dad meant 27. So I got there, with my friend John, without paper or pencil (didn't think to bring it). In my purse, I had an envelope, that I tore open, and a golf pencil. We looked in that book, found the sections of the wall, got down on our knees and shaded the names. When I went to Louisiana a few weeks later, I presented it to my dad sheepishly. "I didn't have paper," I said. "It's okay," he said rubbing his thumbs over the shadings. "It's okay." Still, I felt badly.
When my parents moved last winter, my sister and I helped pack an old dresser while my dad supervised. There, in the top, was the money and the letters. And inside a Ziploc bag, was the envelope. "Daddy!" I said, surprised. It was his turn to look sheepish. "Aw, Ugly," he said, "I told you it was okay."
Happy Veteran's Day.
Posted by elle at 4:32 PM

This is a really touching post. I had an uncle who was a vet. He died after the war, but my dad still won't talk about it.

that is an amazing photo and post. thanks for sharing...