What's the Matter with Louisiana?

Been thinking about starting a new blog called "Dispatches from the South" or something so I can just post ridiculous and non-ridiculous shit I stumble across everyday.

Then I realized, I barely write here!!! Might as well post my observations here. So, continuing my critique of Louisianans who make me want to pull my eyelashes out, I present the following two items:

Sharon Hodges, 61,... was charged with simple battery and disturbing the peace with racial slurs Thursday.

My first thought when I saw the first article was, "I have to tell Kim!" but then, I wondered if that put her in the, "Hi, I'm elle and this is my best friend, Kim, worldwide spokesperson for all biracial people" position.

So, I decided that it would be fun to just half-heartedly pick apart this racist Justice of the Peace's (he should not bear any title with the word "Justice" in it, IMHO) (il)logic:

"I'm not a racist. I just don't believe in mixing the races that way," Keith Bardwell told the Associated Press on Thursday. 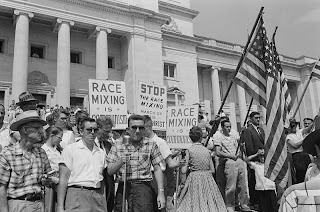 He apparently believes that somewhere, there is a "pure" race. He is prefacing his sentence with, "I'm not a racist..." He seems totally unaware or unaccepting of the notion of race as a political, social, and economic construct. Yes, Mr. Bardwell, you are a racist. He then says,

"I have piles and piles of black friends. They come to my home, I marry them, they use my bathroom. I treat them just like everyone else."

Really, is he using the "I have a (fill-in-the-blank) friend!" argument? And is there anything more telling than, "They use my bathroom?" He compares his racial "tolerance" to the Jim Crow Era and has decided he his suitably progressive? Progressive enough that he's wiling to allow black people in his house and take the risk of getting our cooties!

[I]t is his experience that most interracial marriages do not last long...

[Bardwell] came to the conclusion that most of black society does not readily accept offspring of such relationships, and neither does white society, he said.

"There is a problem with both groups accepting a child from such a marriage," Bardwell said. "I think those children suffer and I won't help put them through it."

I don't know divorce statistics, I really don't. But I don't think the rate of staying-togetherness is impressive for many marriages these days, regardless of the racial background of the partners. If the rate of divorce is higher for interracial couples, I can't imagine why, given the welcoming and supportive social climate evidenced by people like Bardwell.

Also, this theory that people do not "accept" biracial children? First, let me state that I understand CLEARLY the difference between conceiving children in a consensual, loving relationship and conceiving them in a sexually exploitative system like slavery. But I have to point out that biracial children have a long history of being part of "black" families, because of the realities of the lives of enslaved women. Not "accepted," as if the effort to love them is always complicated and must be consciously undertaken.* It's as if Bardwell has been enjoying some of that "tragic mulatto" literature on the side.**

There is nothing that makes biracial children inherently prone to "suffering." Of course, I cannot personally speak to the experiences of biracial children and I know there are issues living in this society as a biracial person. But much of that is the byproduct of living in a highly racialized country, where we've understood race, for so long, as a binary, and are obsessed with making people fit one category or another. Louisiana is a perfect example; it wasn't that long ago that the state proved it's dedication to the one-drop rule.

If he did an interracial marriage for one couple, he must do the same for all, he said.

"I try to treat everyone equally," he said.

No, you don't. if you're marrying some people and not marrying others, you are not treating everyone equally.

And, if I'm not mistaken, this is an elected position in Louisiana.

As to that second article,

A West Monroe police affidavit said Hodges claimed a woman cut in front of her at Walmart's return desk, and the woman's daughter lunged at her.

The woman's daughter admitted to lunging at Hodges after she used a racial epithet.

I would ask, in whose mind does it make sense that the reaction to cutting line is slinging racial slurs, but I think this says it all:

[W]itnesses heard Hodges yell a racial epithet at the woman and say, "You will respect your elders, especially since I'm white."

** Since he depends on his perspective as a Louisianan, let me throw in mine. Lately, when I go home, every time I enter a store, I see white grandparents or godparents or aunts and uncles (and I partly assume the relationships and partly know for sure, because people ask them, "Who is this you got with you?") with biracial children all the time. Why do I even note it? Because that was NOT something I saw growing up there.

Today marks 150 years since the failed raid on Harper's Ferry. In the aftermath, John Brown predicted, "that the crimes of this guilty land will never be purged away but with blood."

The historical portrayal of him for so long was dismissive and ableist-- he had to have been wild and "crazy"-- what white man would risk all that for black people? It pissed me off badly. I adored John Brown when I heard of him in my history classes. In fact, while working on my M.A., I took on the haters in a paper entitled "John Brown: Crazy like a Fox." If I had known then what I know now, it might have actually been a good paper. :-)

Thinking of how he has been "written" reminds me of several things:

1) The people who dismiss slavery as the most significant factor leading to Civil War (again, the idea that this nation would've torn itself up over an issue that had black people at the heart of it? Impossible!)

2) Tim Wise's observation that so many people, when made aware of his anti-racist work, ask, "What happened to you?!" Hard to imagine that people would actually work to disinvest in whiteness--which shows how much we need to re-think the ideas that whiteness and related privilege are largely invisible*

3) H. Rap Brown's (Jamil Abdullah al-Amin) assertion that "violence is as American as cherry pie." It's been a primary tool of this nation-state; why are we surprised that citizens of any political position engage in it? And relatedly...

4) ...The absolute dissonance that allowed southern sympathizers to write about the Klan, for the longest time, as an honorable organization, that still allows my students to be taken aback by my use of "terrorism" when I describe Redemption, but permits the vilification of John Brown.

I want you to understand that I respect the rights of the poorest and weakest of colored people, oppressed by the slave system, just as much as I do those of the most wealthy and powerful. That is the idea that has moved me, and that alone

which often makes me wonder how his position on class** also contributed to the portrayal of him.
__________________________
* And people are doing this work. Beyond the writings I've seen, a few weeks ago, I saw one of Jane Elliott's older films in which she asked an audience full of white people how many of them would like to be treated like PoC in this country. Not a single hand was raised.

** Respect for the poor and "weak" is derided now--imagine how it must've been 150 years ago.

We finally found something in which we can be number one:

"Louisiana's rate of women murdered by men is marked number one in the country."*

Shortly after that line, the article (from a Shreveport television station) reports: "This news hits us at a time when a local shelter for battered women is struggling to stay afloat."

Some other areas in which we are "notably" ranked (just a select few):


We have the "highest number of deaths of infants per 1,000 births and total infant mortality."

In overall child well-being, we are the second lowest.

We have the second highest rate of child poverty. We are number 49 in the nation, behind only Mississippi. Considering the facts that 1)we were "just" number 48 a few years ago and 2) "analysts see harder times ahead thanks to the still-lurching economy," Mississippi might oughta be worried--we're coming for your position, baby!

But, you know, at least we ain't supporting no crazy shit like shelters and centers for survivors of "domestic" violence**, education and better healthcare!

That would be the real drain on the citizens of Louisiana.

I mean, even if it's unclear what Louisianans are for, we do know what they're against. Trying to maintain political, economic, and racial hierarchies is much more important than the fate of Louisiana's children.

*This deserves a much more serious post of its own.

I know I talk a lot about Deuce--the new-baby-ness hasn't worn off in 18 months, apparently.

But his older brother, the kid whom I co-parented for a while, the kid who knows me like the back of his hand, is also incredibly close to my heart.

He does things like call me from Louisiana when shows he knows I like are on TV.

One day, in a buffet-style restaurant, he presented me with a caramel sundae he'd made, just because he's seen me order them before. It was the best one ever.

He calls me every Saturday that my alma mater plays to tell me game time. He just called to tell me, "We're winning now!"

I don't know many kids who are as detail-oriented and observant as he. It's like his mind is a catalogue, and he's carefully tucking away things he notices about what people like, what makes them happy.

And I know some of you think you have pretty cool little relatives...

So, my son, his best friend (our neighbor), and I just got home. While in the car, I noticed a Bed, Bath, & Beyond Coupon on the seat and said, "Oh, good. I need a grill!"

My sour little kid said, "Why? We don't have enough friends to grill for."

"We do like the cartoons, and I get on top and [the neighbor kid] is on bottom under a trenchcoat so we look tall."

I thought he was going to say because my son's face would still look young or it would be so obvious what was going on.

Instead, he said, "How you gone explain Mexican legs with a black person on top?"

They fell out laughing, then my son tried to think up explanations. "I could say I'm biracial."

And the best friend nixed that one, "You wouldn't be half-and-half like that!"

"They did it on Scooby-Doo all the time!"

"They were all the same color!"

"They only fooled ghosts and monsters."

"Ghosts and monsters could see!"

"You need to think before you talk, dude. Scooby-Doo is ridiculous and so are you."

At that point, they were laughing so hard they couldn't sit up. I was wondering what was so funny, but smiling.

I cannot figure out what makes these kids tick! :-p
Posted by elle at 4:24 PM 2 comments: