Went shopping to find some bug-related, science-y stuff for an event at my son's school. Check out the science kits I saw.

First, did you know boys and girls require different science kits? Designed to appeal to their natural, scientific interests? 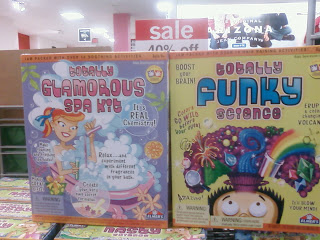 And while the "boy's" kit promises to boost your brain... 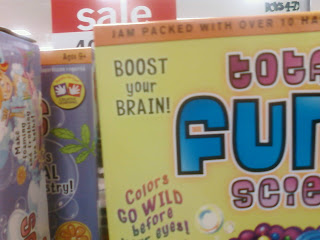 ...the "girl's" kit promise to relax you and let you experiment with different fragrances. 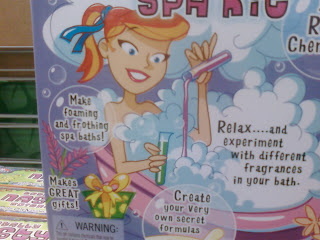 The boy's box is also covered with words like "go wild" and "erupt" and "blow your mind,"while the only thing that promises to be exciting about the girl's is the foaming and frothing of bubbles.

I had two ideas in the store. 1) Wow, what nice, shiny new wrapping for the very old active boy/passive girl stereotype. In addition to the wording I described above, the girl's kit is "jam-packed with over 18 soothing activities" while the boy's is "jam-packed with over 18 hair-raising activities." 2) They really think girls hate/are averse to science--notice that, while the boy's kit is outright labeled "totally funky science," the girl's masquerades as "totally glamorous spa kit."

But don't worry, a bubble on the girl's box reassures us, "It's REAL chemistry."

ug, really? I'll be sure to tell my sister-the-rocket-scientist that she is in fact doing 'real' science. She'll be so relieved.

But... do teen and pre-teen girls really buy that they need to relax and be soothed!?

That makes me *so* mad. When I was a little girl I use to pick boys grab bags at this little cart... I can't believe that 30 years later girls still have to pick the "boys" product if that's what they want instead of it just being a kids science kit.

lizriz, I bet you can believe it.

It's a constant struggle for us to bring up Baby Grrl without outside influence on what she's supposed to like because she's a girl. I think we're doing ok so far, since she likes Spider-Man, dinosaurs, and Monster's Inc (instead of "princess movies"), but she also likes to play tea party with her 4yo girly cousin.

Hm, I think I'll choose to interpret this to mean that it's only the boys who need their brains boosted because the girls' brains are already in top form......

Every year I have the pleasure of chaperoning a school bus full of young teenage girls to Women in Science and Engineering at our local university. The event hosts close to 2000 young women. They spend the day in hands-on workshops doing real world science and engineering projects. Each workshop is hosted by women scientists and engineers. The day's activities end with a female keynote speaker who is doing something exciting in science. The event hosts ask that the teachers who are chaperoning also be female. Often the only men the girls see all day are the stray male teachers from schools who can't seem to find a female science teacher to come. It's a "hair-raising" day. No bubble bath anywhere in sight. Hopefully, this idea has spread like wildfire, and many thousands of girls get this experience. Do you know the name of the company that makes those products? I'd like to tell them why we won't buy them and suggest they help sponsor a "Women in Science Day.

I've been thinking about this. It really does bother me. At the same time, I have to admit that my (female) cousin worked as a chemist for a cosmetics company. It is real science, but I hate the marketing of it.

totally inaccurate because i am the one who needs some soothing up in here!

Is there anything on the 'totally funky science' kit that indicates that it's intended for boys? Other than its juxtaposition here with the 'spa kit', I mean. I couldn't see anything on the larger image, though obviously there could have been something elsewhere that we can't see here. There does seem to be a cartoon girl on the 'totally nasty science' kits below, though.

If the 'spa kit' is just one of a range of science kits and they've marketed it towards girls while marketing those that offer science for its own sake to all kids, that's still pretty rubbish but it's better - at least it'd mean girls don't 'have to pick the "boys" product' in this case at least.

Mark, do you think there's anything about the totally glamorous spa kit that indicates that it's for girls? Do you think it's meant to appeal to boys? If the other kit is meant for both, why do girls need a separate kit? What, did someone have the idea, "Just in case girls don't like science, let's get them with what we know they are socialized to like!" (except I'm sure that person left out "are socialized to)

I pulled these off a display that had all of one on one side, all of the other on another. The division was purposeful to me.

And I think it's quite revealing that the default kid on the totally funky science kit is a boy.

There are other messages built into this, too. In my experience with children, when we go into toy stores girls "know" to go for the stuff with girls on the wrapping and the soft pastel colors. Boys reach for "boy" stuff with bolder, darker colors. That stood out to me, too. These pics are snapped with a camera phone, so the colors aren't all that wonderful, but they fit the pattern I mentioned.

My original point was this: the spa kit is horribly gendered, but that doesn't mean the funky science kit is too.

I typed out a long (obscenely long) comment defending that point. I really do think it's defensible (subject to the qualification below, which pretty well destroys it); I'm not posting it now because I don't think it really matters. I suspect all that it would mean if I were right is that 'gender-neutral' packaging is boy's packaging - after all, 'bolder, darker colors' than pastels covers just about every other colour there is. Similarly, a 'gender-neutral' science kit is, as far as it matters, a boy's science kit. I realise this isn't exactly ground-breaking stuff but having had the run of every bit of the toy shop but the pink aisle when I was a kid it's something pretty big to suddenly get it.

To put it another way: your blog post just brought me to a much more direct understanding of my own gender privilege than I have ever previously experienced.

In the spirit of science, I decided to do a bit of research (well, I Googled).

All the other titles appear to be aimed at both boys and girls (discounting the TV-show tie-in titles, all boxes feature either a pair of children, or none at all).

Surely the specific titles you saw on display say more about the store's purchasing choices or the display dresser's decisions?

Perhaps it might be worth having a quiet word with the store manager?

Well, as long as it's only a well-known national store reinforcing sexism and not Elmer's, and only two wittle bitty kits, it's all good!

Surely the specific titles you saw on display say more about the store's purchasing choices or the display dresser's decisions? say more about those things than what? the company that felt it needed to dress up a science kit by removing the word science and using what is presumed to be visually appealing to girls?

only one little thing, though, right?

I know you all posted this a couple of months ago so I do not know if you will receive this. While I HATE the concept that girls can only be interested in science if it smells good, I disagree with your interpretation of this product. I am a mother of a 12-year-old "princess". It was quite a shock to me (a true tom boy from birth) to realize that as soon as my baby was able to "choose" anything she chose PINK and FRILLY every time! She is an honor roll student with the most amazing intellect I have ever been in the presence of. She LOVES science and she LOVES any and everything girly.... makeup, perfume, bath oils and salts and bubbles and SHOES!!! When I saw this product I was thrilled, I can mix two of her loves in one mind engaging Christmas gift! The whole marketing world is absolutely screwed in the head for the way they treat the body image of women, however, even girly girls can be of extremely high intellect and the science of beauty is REAL science.... Science does not have to be gross and slimy, even if I would have chosen the "boys" box when I was a young girl, I am happy Elmer's has this option because it is the one my daughter would choose!

Well, I'm sure it would appeal to your daughter, socialized as we are from birth to love "soft" "pink" "relaxing" "frilly." I don't know what to tell you except girls are not born with some sort of natural preference for pink,

Truely a nice blog and thanks for your great work. By the way, welcome to our websites: nike sports shoes and ghd hair straightners. Every men like sport, then, it is quite important to have a pair of right cheap sports shoes to make you fully enjoy the sports. We provide puma cat , cheap nike shox, cheap nike max, shox shoesshoes, nike shox r4 shoes, shox shoes, ferrari shoesrunning shoes which are brand new and in perfect condition but on discount. All of the shoes, including the popularnike tn dollarpuma running shoes, cheap nike shoes,which is the representative shoes of nike mens shoesshoes are authentic and original of top quality. For people like running and playing basketball and other field sports, nothing would be more suitable than the cheap adidas shoes and nike shox nz basketball shoes. In addition to the shoes mentioned above, you may also be interested in the cheap adidas shoes , puma shoes and, nike running shoesWholesale and retail are both acceptable to us. Welcome to our site and free to look! Thank you and wish you a nice day. Good Luck!
Everybody like beauty, which is quite commen, especailly womens. Welcom to our store which is focused on sellingghd hair straighteners mk4and hair straightners. For women, especially the young girls, this ghd iv styler hair straightener is the best choice. ghd hair straightnersis famouse for the pretty outlook and the top quality. The price of this cheap ghd hair straightenersis acceptable and rational. Ed Hardy Jeans, Ed Hardy Hoodies ed hardy shirts ed hardy clothes ed hardy clothing
ed hardy trousers

Hello, wonderful blog!thank you. By the way,here we offer a lot of good nike shoes,you can come to have