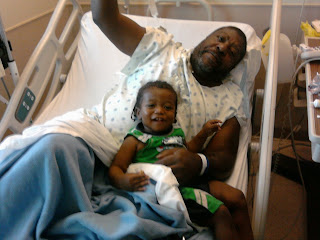 Daddy and Deuce 9 June 2009
This is not a good week. I am behind on my interview schedule. I am trying to wrap up the presentation-that-shouldn't-be-a-paper for next week's conference. I am coordinating a baby shower.

And mostly, I am being really, really quiet about my dad. He's been in the hospital for a few weeks now. He complained of a sore foot for a while. The local clinic took his word that it was his gout and prescribed a pain medicine. The people at the dialysis clinic took one look at it, discovered a badly infected sore, and sent him to a hospital. The people at the hospital were bothered by the look and smell of it and sent him to a VA hospital.

They tried antibiotics, then amputated two of his toes and some of the padding on the bottom of his foot.

He is a diabetic, with kidney failure, and congestive heart failure and he still smokes. His circulation is much lower than poor. The site of the amputation is not healing because of inadequate circulation. Today he told us, "They're going to have to amputate it." I thought he meant his foot, which was enough to bring tears to my eyes.

A few more minutes into the conversation, I realized he meant his leg from below the knee down. I stood at the sink in his room, washing my hands, and telling myself, "He is trying to be calm. Don't you dare start crying. Don't you dare."

I am already feeling the guilt of having made a wholly inappropriate and probably hurtful comment. The doctors had been asking him, since the discovery of the sore, had he stepped on something. He said no, because to his knowledge, he hadn't. A few days after he was hospitalized, my nephew discovered a nail in his shoe. I told him in a teasing way, "Daddy, I done cussed you out! You know you have to be careful with your feet."

It was a little flippant remark on my part. A couple of days later, when we were on the phone, he said something to the effect of, "I can't keep beating myself up, but I was supposed to have a mirror and check my feet."

He didn't need my little inconsiderate comment, because he's been "cussing" himself out, feeling guilty and sad. And I've been thinking, "Why did I say that?"

There's also the fact that my dad is usually this stoic person--when he's been in the hospital before, we've been distraught and worried about getting to see him and he always says things like, "You have a life, a job, kids, etc, don't worry about me," as if that's possible.

But this time, he's been very open about being lonely, a hundred miles away from home (and more than 400 away from me). He was ready for me to come home. Sometimes when I call, he'll sound so tired and I'll say something like, "Daddy, I don't want to wear you out." And a couple of times he's said, "I'm okay. Just talk to Daddy for a few minutes," and I know he's bored and lonely and worried. I talked to my dad for 40 minutes on the phone last week; I don't know if that's ever happened.

I can see the sadness and I wonder if he's thinking about his mortality--he's already older than his father and two of his brothers were when they died. He's worried about walking again and having to go to a nursing home if we can't get the house right.

And I'm worried, worried, worried, too. I have to leave Sunday because my son is going to summer school for math and I have that conference. Honestly, I'd say fuck summer school because he's going to fifth grade anyway, but he has struggled with math since pre-K and he only met three of four standards in math this year, even though he passed it for the year with a B. Multi-step word problems give him fits. He can't miss more than three days or he will be considered a non-completer. The three days I decided he could miss were June 9-11, so I could have some time at home.

Then, he's in summer school until July 2 and I start teaching summer school July 6. When will I have a moment to travel again? My car has 154,000 miles on it, but I can't afford to just up and by two plane tickets to a small rural airport with short notice. There's also the fact that the drive, at least 8.5 hours, by myself, is a bit much for me these days. But how can I not be here for my father's major surgery?

And the conference, my God, I'm cobbling that together bit by bit, but can I be unprofessional for a moment and say that, right now, it seems like the most inconvenient thing in the world to me? My heart is not there. I feel guilty about that as well, because they're paying me a significant sum for a day's work (ok, more than a day, when you count prep, but you know what I mean).

Then there's summer school, which I feel mostly prepared for. But the fall! Two new preps! I've only begun to fight!

I know I'm all over the place, but I needed to vent. I don't know whether I'm coming or going, I swear. I'm just resolved not to cry because if I start, I will not stop until I have a headache that further complicates things.

Even as I type this, I'm trying to put it together in my head. Today is just Wednesday. I can stop dreading this conference, flesh out the admittedly good outline I've already done (the presentation is only 20 minutes and I'm supposed to encourage the participants to engage. Then, the 30-minute workshop I lead afterward will be on how to use related primary source documents). I can do two interviews tomorrow rather than one. I can get someone else to assemble favor bags for the shower. I have lots of help, and we've already done 90% of the work.

But right now, I don't want to be calm. I want to say all the shit that is plaguing me.

Take care, my friend. You and your family are in my thoughts.

I'm so sorry Elle. I will be thinking of you and your family.

Dang, Elle, I'm so sorry you've got such a heavy heart right now. I will keep a good thought for you and your dad and your whole family, and hope that you let yourself off the hook for that joking comment you made to your dad about his feet. I can't imagine he's anything but blessed to have a daughter like you.

Thank you all. I need this right now.

long(ish)time reader/lurker.. I'm sorry you and your family are facing these tough things, and I send my thoughts and a hug.

I'm so sorry to hear that. I'll be thinking of you and your family.

I'm so sorry, Elle. You & your family are in my thoughts.

I wish nothing but strength for you and comfort for your father. My father is in the hospital right now for something very similar. He's a diabetic with a terrible infection and blood clot in his leg. I know how scary it can be. Hugs and well-wishes to you. Hang in there.

Oh Elle, you and your family are definitely in my prayers. Do take care of yourself, and that includes venting out your frustrations.

My prayers are with you and your dad, Elle. You've got so much on your plate right now, but I hope everything works out OK.

Elle, I'm so sorry to hear about your dad. Your story actually rings a lot of bells for me, because my own father is failing in a similar way, except that there's nothing actually wrong with him except for crippling arthritis in his back, and the world he's passing into is a world of pain rather than a world of serious illness.

My thoughts are with you and your father.

hi elle, i've been out of blogland for a while, but i had to come back in to send you some good, healing vibes. sorry to hear about everything on your plate, and the anxiety you're feeling about a beloved parent who is sick. i know what the guilt and worry are like, and it is draining. thinking of your family.

omg, i am so sorry to hear, elle. lots of hugs, you and your family are in my prayers.

It's funny. I came to your blog just moments ago via another blog -Womanist Musings - and read this particular post. We're led where we need to go, aren't we?

I sent up prayers for strength and healing for you and your father. I will continue to pray for the two of you. :)