It may seem that I talk a lot about how products geared for children reinforce and perpetuate ideas instilled by living under the kyriarchy, but, damn, I'm continually astounded.

We were shopping for summer clothes. My son, avowed lover of graphic shirts, thought this was funny: 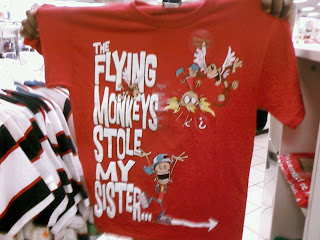 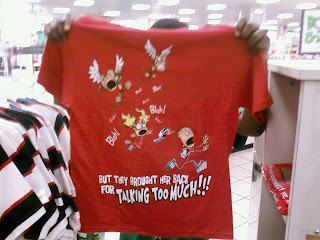 I told him I didn't like it, then tried to explain why.*

"He's saying his sister is so annoying, he was happy she was kidnapped."

He understood that part, but the back took a little more.

"This is based on a stereotype that girls and women talk a lot, that their talk is annoying, and that what they say isn't important."

A debate ensued, which he began with, "Mama... some girls do talk a lot."

He kept looking at the shirts, then said, "You are really not going to like this one!" 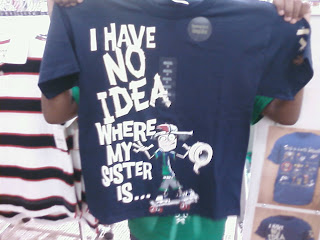 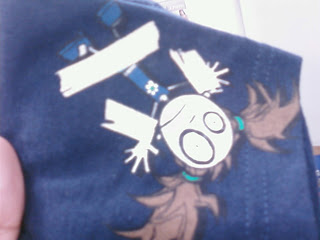 *Sorry for the (camera phone) picture quality. The shirt says "The Flying Monkeys Stole My Sister... But They Brought Her Back for TALKING TOO MUCH."

**The front of the shirt features a smiling boy holding duct tape. "I have no idea where my sister is," he says. On the sleeve is his unsmiling sister, restrained with the duct tape.

That conversation reminds me of talking with my 15 year old cousin. I found that he responded best to my telling him that the reason that stereotypes seemed true was because we were expecting them to be, so we subconsciously search for evidence to back it up. He still doesn't believe me completely, but he isn't ignoring my points either.

one of the things I appreciate about your blog is precisely your tendency to center on children's experience, since I think this is actually an incredibly useful way of looking at social justice issues (in multiple ways, too: i.e., we think of a world we want our children to inhabit, but part of the way to get there is to try to raise our children up ever more aware [which is one reason, incidentally, I am more or less pro-political correctness], not to mention that when we say things like "women have internalized a sense of being..." or "all whites in the US are to some degree racist because..." we're talking about attitudes that begin *in childhood* which IS part of what makes them so hard to break). plus, what a culture tells or gives or expects of its children tends to act as a pretty good proxy for what it views as "normal" or "acceptable" or "expected."

and on that note, you're right, it is continually astounding. the second shirt especially is pretty awful.

i'm astounded at that second shirt. :(

The good news is that your son concluded on his own that the second shirt was a problem. Shows that you're doing a good job. :)

I don't have anything to add, except to second what Feminist Review said.

I like to think that some of the stuff we try to live gets through.

I am appalled at those shirts, just as I was by the "boys are dumb, throw rocks at them" ones.

Wow. Those shirts are awful.

I'm glad you took the time to post about this, it's good to read about how other mothers teach their sons not to be sexist.