Ok, more than a day. This is an opportunity for me to say, "Look how tired but happy I am!" and a real diary-like entry for the future.

Friday, I left Texas, en route to Louisiana for Spring Break. My sister and her crew had come to visit for their Spring Break, so we traveled as a mini caravan.

At least, until I was pulled over by the most talkative (but friendly) cop in Texas. I thought the speed limit was 70 because it was daytime. He claimed it dropped to 60 at some point and I was going 74 (yes, speeding either way, I know, I know).

I told him I hadn't seen it drop (I really hadn't) but that I fully acknowledged I was going 74. I don't argue with cops or try to talk my way out of anything. It's a matter of pride for me, even though I cannot afford a ticket. He asked me where I was going.

"Long ride," he said. (Yeah, that's why I was going 74). He then launched into a story of how he had been stationed at Ft. Polk and how far was my hometown from there and the lack of big cities, etc. etc.

I mostly nodded and smiled then drove away happily with my warning. I would only go 72 in a 70 mph zone, I decided. That's a compromise, right?

After two stops and about nine hours, we made it home. Bed, you think?

Wrong! I had a Lemon-and-Lime anniversary party on Saturday for which I needed to decorate. I'd thought the party was the 20th which would give me time to get home to prepare. I was wrong and we were on the clock. It was a relatively casual party, but still!

Coti deserted me, my sister promised she'd come cook the next day, mrs. o was exhausted from her own too busy week. So, Janna, T'niya, Tren, Mama and I went to work in the main room while Dee (one of the honorees) cleaned the kitchen and unpacked groceries.

We made all sorts of lovely discoveries. The last renters of the place hadn't cleaned. It was filthy. We planned to use three tables for a buffet style meal and set up eight for guests. We only set up six, because so many were broken. Below you can see our efforts-in-progress. 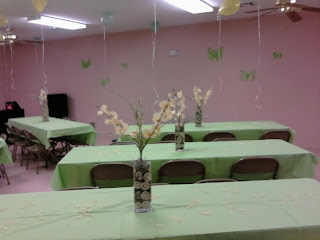 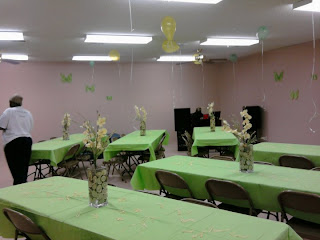 I made it back to my parents' at 2 AM and couldn't sleep. I decided to read. Around 4 AM, I dropped that book in my damned eye and realized, it was time.

Of course, I woke up at 5, fell back to sleep, and woke up for good at 8. I was excited about the day and had so much to doooooooooooo.

Coti, in makeup mode, agreed to play chauffeur. I went to every store in town, I swear (which amounts to fewer than ten, but still) for last minute items like pans. And, I changed my mind again and decided I wanted to do a small candy buffet. I had jars; I just needed yellow and green candies. I bought every bag of lemonheads and Andes mints at Dollar General, then bought the little green and white mints from another store. My sister brought green jolly ranchers, lemon drops, and green and white candy rings from a neighboring town. Coti and Tren filled a center vase with lemons and limes, and voila! 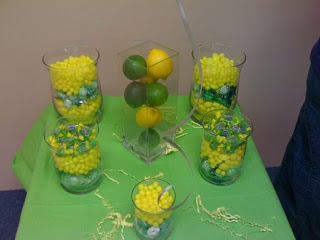 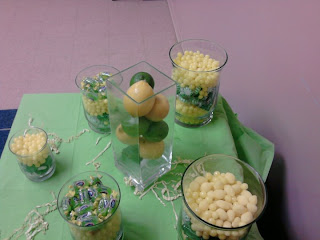 But food. I'd decided we'd have sandwiches and salads. Plus, the hubby involved wanted wings. So, our menu (sandwich wise) was mini burgers, mini pulled pork sandwiches, these hot deli sandwiches I make on rolls with a spinach and cream cheese based spread, and chicken salad sandwiches. Salads were chef's salad, potato salad, coleslaw, a fruit salad, and pasta salad. And we were going to have barbecue wings and Italian wings.

No way could I do that, all alone in, a day, in a kitchen with one really small stove. I had so much help. Coti cut up meat and cheese for the deli sandwiches, ran to the store, and stopped at everyone's house to pick up miscellany. Tren made chicken salad, she and Mama made sandwiches, and assembled deli sandwiches. My sister made the green salad, patted out some of the hamburgers and she and Tren fixed up the punch. Tesha made half the coleslaw, seasoned the chicken, made potato salad, cut up lemons and limes. Mama cut up the honeydew (we wanted green and yellow fruits for the fruit salad with a few strawberries to make it "pop" but we didn't know how to approach that honeydew :-). Mrs. O peeled potatoes and sliced rolls. I seasoned the hamburgers and patted out most of them, made coleslaw, cut up strawberries, made a pasta salad, made limeade and lemonade, made the spread for the deli sandwiches, prepared the roasts for the pulled pork, and made barbecue sauce. I also made pitchers of way too strong margaritas, mojitos, and lemon drop martinis (I was serious about the yellow and green, y'all). That stuff was so strong, I didn't touch it. I don't like to taste alcohol in my alcoholic drinks. Initially, I planned to mix and pour as the night proceeded, but my cousins said no, we were not going to run and serve the whole night. So we set up cups and set the pitchers and ice out. I also had two punchbowls, one with a limeade based punch and the other with a lemonade based punch. 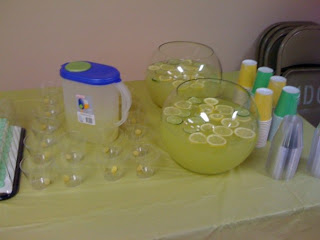 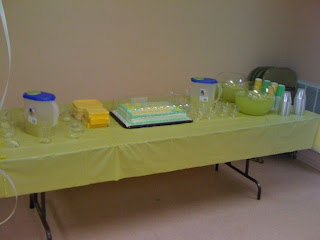 I was on my feet for nine hours, on four hours of sleep. And the night before, I'd gotten about five hours then taught and drove all day. You know where this story is going, right?

My back! My ankles! I couldn't bend over by the time the party actually started. The hot shower didn't help as I hoped it would. I kept my cute little open toe heels on for all of ten minutes before I retreated to the kitchen and my house shoes. It was lovely and we were all in good moods, but Dee and Mike like blues music and I can't get down with it.

I made it until midnight. I had to come home and have mama rub my back with Bengay. Muscle aches beat my cute black dress and shoes! I'm getting old, y'all, for real.

I was supposed to go to Family and Friends' Day at my cousins' church. Church started at 11. I rolled over at 10:52, thought about making it, realized my clock was an hour behind and flopped back over.

I finally stumbled up, my eyes full of sawdust (I didn't drink the stuff I made. I did, however, have Malibu coconut rum and pineapple juice), and my body aching. I ate a plate of collard greens so I could have something on my stomach to take three ibuprofen for my poor body. A few hours, a coke, and this long story later, I feel better.

I could go again! But I think I will just climb in bed with this book I found.

No use in overdoing it :-p

I am in awe of your party skills. The decorations! The food! The theme! The total abundance and attention to detail! You outdid yourself, I think. This is exhausting just to read and I didn't lift a finger but I would totally love to have been there. I know your honorees felt honored and loved. I can feel the goodness from here.

You're not allowed to be old, by the way, until the next generation gets big enough to make the parties.

The very best thing was the wife (my longtime friend) kissing me on the cheek and telling me she loved me and everything about the party. That's what makes me feel so good.