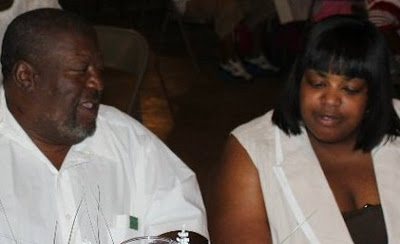 Since my father's death, I've been in this space--the spot where tangible things are so important--his truck, his clothes, the last thing he may have worn. And I have been battling guilt because I was so sick the last weeks of his life that he was consumed with worry about me. He'd just come sit in my room and look at me quietly. Sometimes he'd knock on the door and I'd be too sick to say anything, even when he'd ask if I was ok. I feel horribly about that now.

Yes, I tell myself not to reduce my 35 and a half years with my dad to those last two weeks or so. Yes, I tell myself that the memories I have and the lessons he taught me are things that are more important, more lasting than anything tangible. But right now, so early on, I still have regrets.

People have told me to perceive so many things as signs. A song on the radio, the birth of two new babies to my family so shortly after his death, fleeting scents or feelings. But I'm not that type. I always search for the "logical" explanation.

Back to my need for tangibles. When I finally made it home from my hospital stay, my sister presented me with one of the silicone bracelets he'd been wearing when he died. She had one on her wrist and she gave me one that they'd had to cut off him because his congestive heart failure often made him suffer from edema. I put it in my coin purse until I could glue it together.

Sometime shortly thereafter, I opened the coin purse somewhere and lost the bracelet. I looked for it desperately to no avail. I was heartbroken, but tried to convince myself that it was just a thing, that I didn't need it because I had so much more of him.

And still, I felt horrible. It was one of the last things he'd worn and I planned to always keep it close to me. How could I be so careless?

Last night, my oldest nephew emerged from my father's room with a ring. I recognized it immediately. It was his wedding ring, one he'd refused to take off until the edema made it impossible to wear. Once he'd taken it off, the kids had meddled and lost it. And now, little more than a month after his death, here it was.

I slid it on my finger and went to my mom. She confirmed that it was his wedding ring. She reached for it and I began to take it off. Then she shook her head.

"It fits your finger," she said.

It does, quite well. Never in my life had I been happy that I'd ignored my mom's warnings that cracking my knuckles would make me have "big ol' fingers" with an "embarrassing" ring size. As always in my life, I was happy I have a mama who knows when I need something. 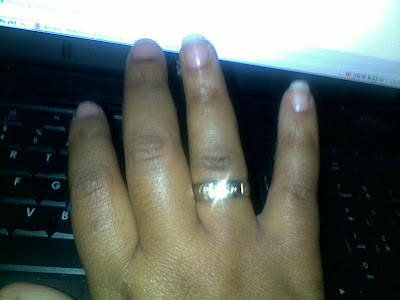 And I needed this ring. I know that one day I probably won't. One day I might be able to look at it fondly in a jewelry box or return it to my mama or be content with memories, but not now.

I don't know if this is one of those elusive, ethereal signs, but I am so grateful for it.
Posted by elle at 3:56 PM

Both pictures are beautiful but ending this lovely post with your hand on the keyboard is perfection.

I have been thinking of you and am glad you can begin to write a bit. You seem to me very young to have to endure this particular sorrow. Please be gentle and patient with yourself.

Elle, my deepest sympathies to you on the death of your father. For I know, from personal experience, the pain your feeling, yet I know it is unique to you. Remember he will forever live within you, your memories and the time you had with him and your son, are priceless.

I think it is great that his ring is now yours. Such a great thing. Give yourself the time to grieve and heal.

Praying for you, my sister.

Thank you both. Both of you have been on my mind lately. Ragey, I went over to your blog today to try to catch up on you!

Thinking of you and sending you lots of love.

This was beautiful. I lost my father in April. A few weeks after his death, the hospital sent me a bracelet that he used to wear. I wear it when I'm feeling low. My brother wears his college ring.